Newsletter #78: Bitcoin is down 60% in 6 months and the sceptics are out. But what really is the the state of the crypto economy. Plus; new research shows the extent that Americans believe social media censors political POVs. And TikTok addiction keeps on growing!

There are now over 11,000 like-minded subscribers just like you who want to know what's happening and what's coming next in the digital economy. Thank you for your support.

Wiser! is a bit shorter this week, I have a buddy staying with me and we’ve been out every day. I'm covering the state of the crypto economy, new data on the impact of social media on society, and some data on TikTok 🕺🏻 in the attention economy. Plus other snippets of insight and information from the tech economy. 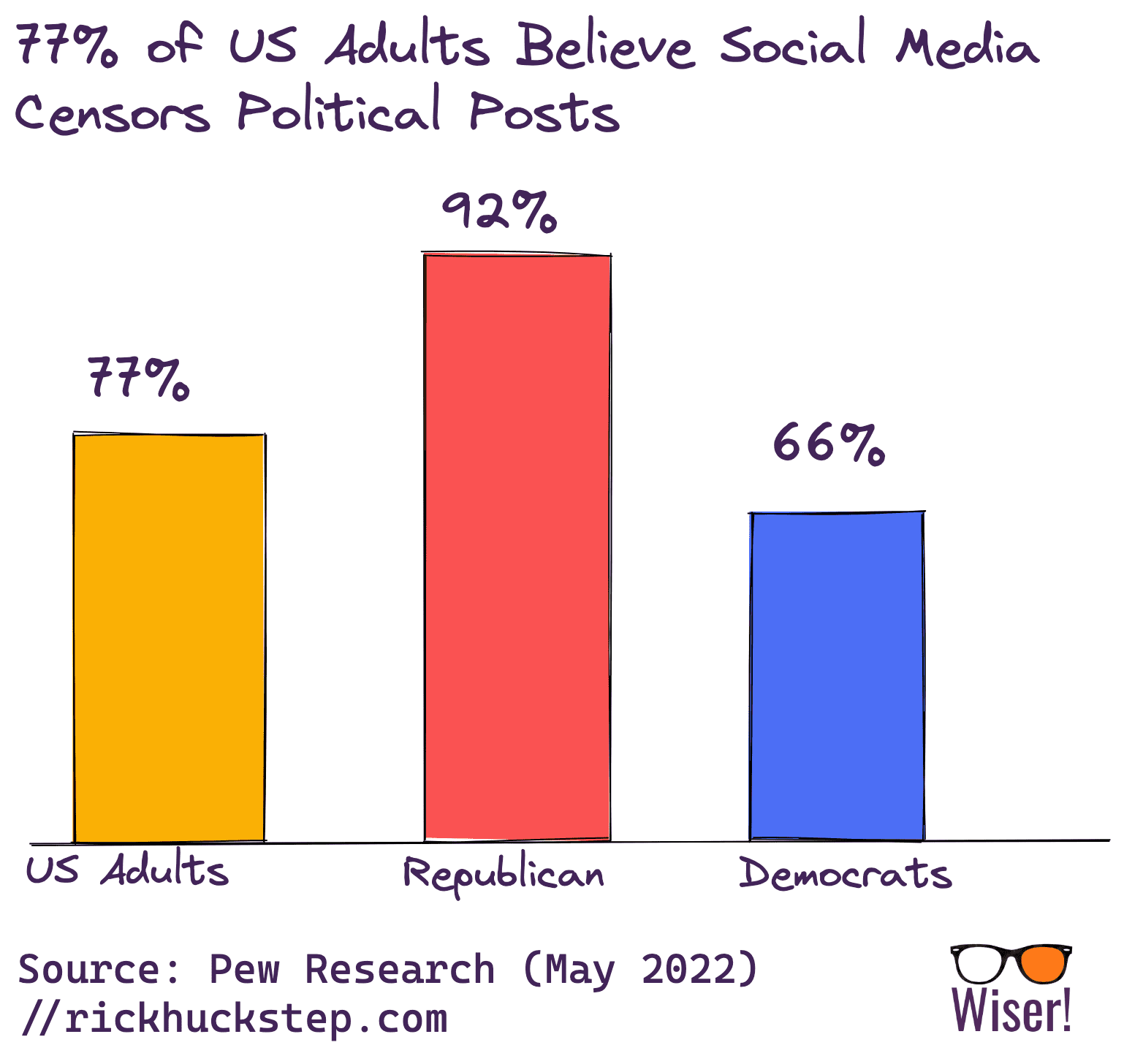 Back story: Pew Research have published new research that finds large majorities of Americans believe that the social media networks censor posts based on the political viewpoints they express.

The research shows that the belief that social media engages in political censorship spans both sides of the political fence. The key difference is that those on the right believe it more than those on the left.

Here’s the thing: the narrative that social media is run by liberal lefties is an unfounded belief.

It is true that social media platforms take down content, but not for political views. They take it down because the content is about drugs, guns, self-harm, sex and nudity, spam and fake accounts, and bullying and harassment.

Think about it: Social media makes money by selling ads. Their business model depends upon users, like you and me, staying on the platform for longer.

They also know that content that enrages us keeps us on the platform longer. Differnces of opinion on ANY subject are a 100% guaranteed mechanism to keep us online.

It’s not in social media’s interest to censor political views. It’s dumb to think otherwise (that’s a cue to trigger you to write a comment and tell me I’m wrong 👇).

Transparency: Every quarter Facebook publish a report about enforcing their community standards. It’s part of their larger push to open their kimono and be transparent.

The report shows us what types of content Facebook remove. It also is a telling indicator that they primarily remove material because it’s good for business, not because they want to censor political views.

NSFW: Universally, the ad based social media platforms have found that users, in the main (there are always exceptions), do not want to see nudity, spam content, gore and individual harrasement. This type of content drives them away.

One of my biggest criticisms of Twitter is that it is full of this type of content, with no filters to stop you finding it. The other day I was innocently searching for tractors and …..👀

The point is: social media firms want you to stay, not drive you away.

This is interesting: The Facebook shows that removing too many posts also drives users away.

For a more detailed read on this issue by the excellent Casey Newton, read this issue of Platformer.

The horrible mass killing of black people by a young white male last weekend threw the spotlight back on to the role of social media and the rise in hate crimes.

It crosses into the debate on free speech (back to Elon and Twitter again). And will be further exacerbated by the new law in Texas that will make it harder for social media to take down content of any kind.

I've written about it here... 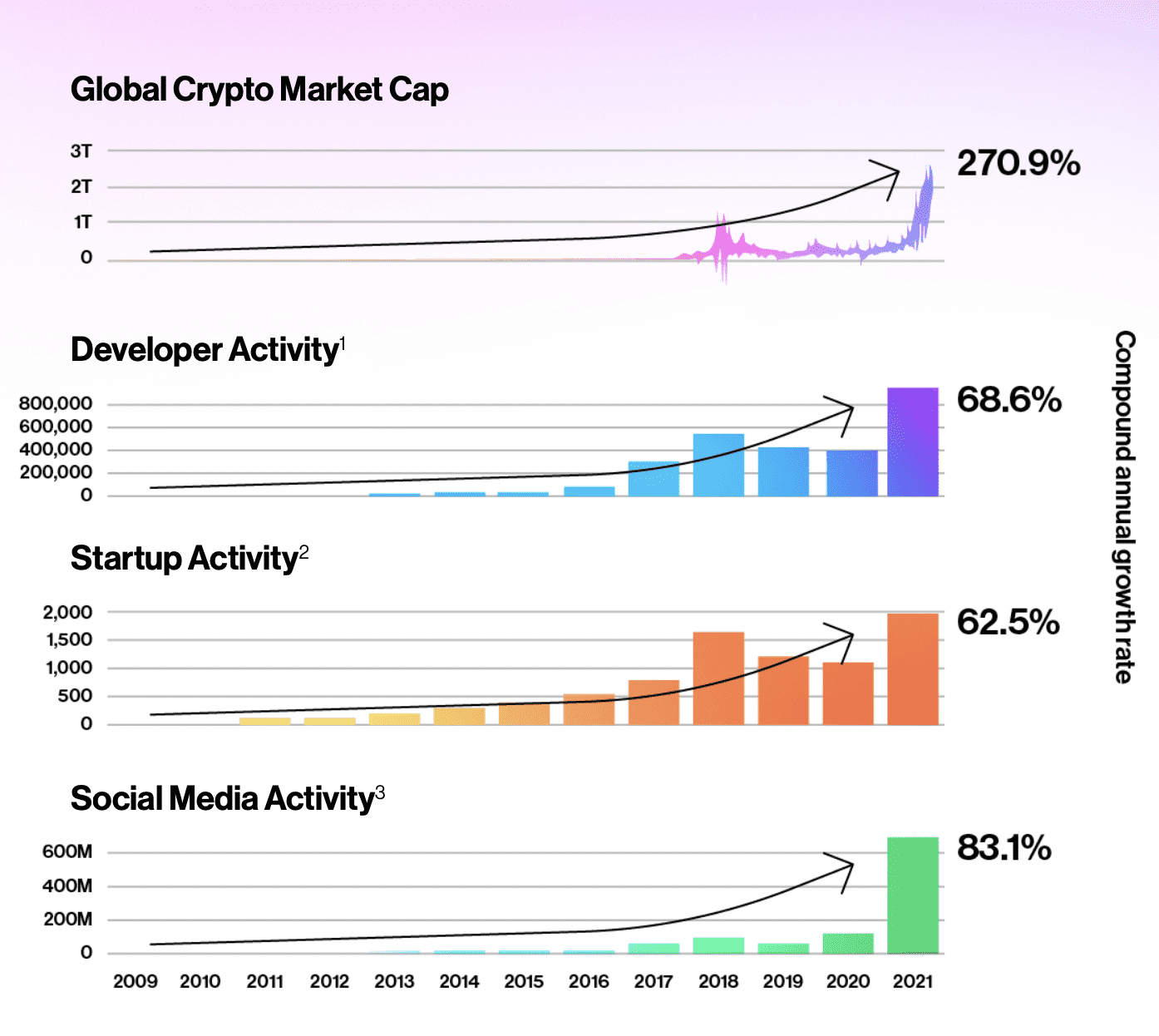 The State of Crypto

Back story: Last Nov, the price of Bitcoin hit an all time hime of $69k. Today it’s hovering around $29-30k, that’s a 60% decline in 6 months or so. The market cap for all cryptocurrencies has gone from being bigger than the GDP of India (5th largest economy in the world) to the size of Mexico (the 15th largest economy).

The point is that because Bitcoin is so dominant in crypto, making up around 45% of the entire market, when Bitcoin sneezes, all other cryptos catch a cold.

Here’s the thing: there’s a lot talk of crypto carnage and the inevitable demise of Bitcoin. Lets face it, the sceptics are having a field day. And they may be right, who actually knows where this will end?

My point is: all markets follow a natural cycle of ups and downs, even the most mature ones. When it comes to Bitcoin, this is the 4th time that we've seen a big downturn (not the first, as many would have you believe).

Think about this: An oft-used analogy when talking about emerging technologies is the internet of the 1990s. Remember, before the dot.com boom and bust of 2000. Before the iPhone. When connecting to the Internet was slow and cumbersome. When the likes of Warren Buffett said he wouldn't invest in the Internet because he didn't understand it.

To find out more, read this. VC firm A16Z just released its first-ever report on the crypto economy. Called the State of Crypto, it's a 56-page bull case for Web3, DeFi and cryptocurrencies.

There's a ton of data and analysis and opinion in here that not everyone will agree with. It depends on your perspective when it comes to crypto.

Introducing the 2022 State of Crypto Report

P.S.:  It seems that Warren Buffett's Berkshire Hathaway is a crypto investor after all. Source: Vettafi

Users spend an average 26 hours a month on TikTok

Prof G:  Professor and entrepreneur Scott Galloway has a YouTube channel. Every week he posts a Chart of the Week. They’re 1 or 2 minute in length, aka "shorts". This week, the Chart is about TikTok.

Anyhow, Galloway’s point is that 4 years ago users spent an average of roughly 8 hours a month on the app. By 2021, that had grown by a third to 26 hours a month.

This growing level of addiction to TikTok is being driven by its 1 billion users who are all producing the content for free. And that’s the point…Netflix spend around $17 billion a year to produce content for the 225 million subscribers whereas TikTok spend nothing.

w/Snippets of Insight and Information

☕️ Wiser! is a free newsletter thanks to the donations of readers like you. It is easy and quick to make a small contribution to the costs of running Wiser! Use this link to BuyMeACoffee.🙏

✍️
Please leave a comment
Let us know what you think about this subject by putting your comments, thoughts or feedback in the comment section below. ☟

Get the latest insights directly to your inbox!
Featured posts

My Tech Stack of Gadgets and Gizmos

DeFi, DApps and DAOs; Where the Magic Happens in Web3

Web3 Versus the Metaverse; Different Journeys to the Same Destination

Wiser! #82: Apple's move into Buy Now Pay Later is all about improving the customer experience with frictionless payments. Plus the Crypto price collapse continues. It's good thing, right? And Lina Khan takes on BigTech.…

Your one-stop-shop for insight and information about Web3, the collective term for the next generation of the Internet. It's a future that is decentralised, where monopoly platforms are replaced by democratised networks.…

Budweiser is building brand assets in the Metaverse & the Crypto Economy: launching an NFT collection, joining a DAO, partnering with Zed Run, a blockchain gaming platform on Ethereum. Will it be worthwhile? Only time will tell, meanwhile, they're learning a lot about tomorrow's digital world.…